In our recent webinar, 10 Actions You Can Take Today to Avoid Skyrocketing Insurance Premiums, four industry professionals provided their insights to help fleets avoid increasing premiums today … and in the future.

SmartDrive: You mention that it’s not just loss experience that determines insurance rates. What does?

Ken: If a motor carrier has consistent excellent loss experience (i.e., a loss ratio below 70%), it is very likely generating a nice profit on the policy for the insurer. In a perfect world – in that instance – the motor carrier’s renewals would reflect a reduction in rates. Unfortunately, even great performing motor carriers will see rate fluctuations because factors other than loss performance put pressure on rates. Factors, such as the insurer’s profitability play a significant role in pricing. A large publicly traded insurer has an obligation to its shareholders to operate in a profitable manner, not just on a carrier-by-carrier basis, but on an overall book-of-business basis. Thus, a solid performing motor carrier generating profit on its policy will be impacted by the overall book of business and see pricing rise, even as its loss performance remains steady.

It remains important, nonetheless, to perform at a high level as it relates to loss experience because motor carriers failing to take steps to improve their loss experience will see a greater degree of “punishment” in a market of rising rates.

Several alternatives exist to reduce outside factors, such as the insurer’s profitability or the market environment’s impact on pricing. Taking on a greater share of the exposure to loss through a larger deductible, or self-insured status, shifts the loss cost within these layers to the motor carrier. This “skin in the game” allows the motor carrier to put to use its strong driver safety, technology use and risk management processes for its own benefit. “Betting” on oneself is very often a great option.

SmartDrive: You talk about aligning with like-minded carriers. Why is that?

Ken: As mentioned above, the insurer’s overall book of insureds drives the performance of the insurer. If a strong performing motor carrier aligns with other strong “like-minded” carriers, the rate outcome should improve. Like-minded means similar approaches to driver safety, use of technology, exposure retained in a larger deductible and other attributes that would make these motor carriers great “partners” in a group program.

SmartDrive: Why are Captives a good alternative?

Ken: Captives are a good alternative because they create alliances between similar motor carriers. They bring more control over the key aspects of an insurance program to the group members and provide synergies, making each member stronger through the objectives of the group. For example, a group captive may require that all motor carriers in the group use certain safety technologies, such as event recording and driver coaching systems. Tightening the group to only those similar motor carriers increases the chances that the group’s performance is better than the traditional insurer’s insureds and thereby reduces the impact of the insurer’s profitability goals as a factor in pricing.

Motor carriers in these groups shouldn’t expect that their rates are going to automatically drop by joining the group and often there are long-term commitments, but in general, a captive with a high level of selectivity will provide rate stability to its members over the long-term.

SmartDrive: How do you know when is the right time to take on a higher deductible?

Ken: In a hard insurance market like the one we are in now.  And, as a motor carrier places a greater emphasis through staffing, policy and technology on reducing accidents, these changes can improve loss performance and put money into a motor carrier’s pocket that takes on a larger deductible. Beating the expected losses within the deductible will result in lowering the overall cost of the insurance policy.

SmartDrive: You mention changing the excess relationship into a reinsurance relationship. Can you explain this and why it’s worth considering? Ken: Excess insurers play a very important role in insuring the trucking industry. However, because any excess insurer is highly dependent upon the primary insurer to keep losses out of the excess layer, there are often instances where pressure from the excess carrier may create a higher settlement value than would otherwise exist. This is due to the risk of a claim by the excess insurer that the primary carrier should have settled within the primary limits. This pressure does not exist if the primary limits are supported by reinsurance. Reinsurance is a mechanism to shift the ultimate cost of any loss to insurers with much greater capital from a primary carrier that may not have the capital to support, but wants to issue a higher limit policy. In the reinsurance scenario, the primary insurer has full latitude to resolve claims within its limits without the added pressure. Reinsurers do require involvement, but they are more like “silent” partners in any loss.

SmartDrive: You talk about claims management and quick claims resolution. Why is quick resolution so important? How does this benefit a fleet?

Ken: Most losses do not age like a fine wine. The longer a claim lingers, the more it will cost to defend and resolve. There are always more mouths to feed the longer a claim sits. Early resolution, prior to litigation, or even at the start of any litigation, requires a practice of fair and honest, emotionless, evaluation of the liability and damages aspects of a claim by an insurer and then the stick-to-itiveness to make a resolution happen. A motor carrier benefits from early resolution because a claim resolved today will be for less than it would be if not resolved. Early resolution will lower the losses impact on the motor carrier’s historical loss experience. In addition, the burden to safety and operational staff to respond to, and participate in, litigation can take a toll on the motor carrier’s ability to operate. Serious accidents are very stressful for all involved, and there is no training for how a motor carrier handles dealing with that external stress.

SmartDrive: You mention that pricing is out of control for mid-to-small trucking companies. Why are they particularly hard hit?

Ken: Because they are at the mercy of the market environment. Many insurers see opportunity to charge hit rates because there is no other alternative. However, if these small motor carriers were to get together and form their own captive, they would bring more control over their insurance destiny.

SmartDrive: You talk about considering an insurer where the motor carrier’s input is the first consideration. Where reserves are based on ultimate exposure vs. insurance company needs. Can you explain this?

Ken: Reasonable reserving for the ultimate exposure is often lost when an insurer simply thinks about its own interests. Higher reserves protect profitability and support large collateral retained by the traditional insurer in deductible programs. When a motor carrier has a larger deductible, the motor carrier’s interest in setting reserves based solely on the facts of the accident should be taken into consideration. This creates a more communicative insurance relationship, builds trust and understanding, and will often lead to a long-term relationship between the motor carrier and insurer.

SmartDrive: What’s one piece of advice you’d give a fleet today to avoid skyrocketing insurance premiums?

Ken: Make driver safety and technology a top priority in your organization. If you want to control your cost, you have to control your output. Having a strong safety program with a strong leader, and using the most recent technology – like SmartDrive – is the way to go.

Take safety and reducing accidents very seriously. Make it a big priority in your organization and you’ll see improvement. It can return, over the long run, benefits beyond your insurance premium.

To learn how to settle claims quickly and take control of your insurance costs, contact SmartDrive today. 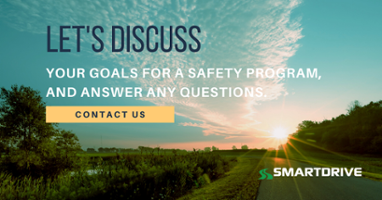